This week's featured blogger is Ramki sir from One page cookbooks..One of the most unique blog with a much more unique concept of introducing 100s and 1000s of recipes in a single page instead of the traditional cook books. He even proved the worthiness of this style of recipes by cooking for a large group single handedly using these one page cookbooks which are a boon to newbies as well as those excited about learning new cuisines. Hats off to this great personality whom I adore 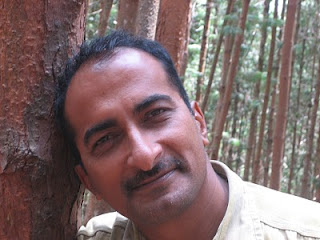 EC: Tell us something about yourself
Ramki: I'll let The Hindu talk on my behalf. I was running a dotcom and had to travel abroad frequently. Eating out was not always an easy option. When I started on regular recipe books, many of them had this " just do what I say" approach to cooking, which did not suit me. After botching up numerous dishes, I had an 'aha' moment when I realised that I do not need to create taste - it is inherent in the ingredients. All I needed to do was to ensure I do not spoil this inherent taste. Cooking then became fun and creative. After I managed to retire early, cooking became a full time passion and now I spend most of my time cooking, reading about different cuisines, food history , trying to deskill / demystify traditional dishes and writing One page cookbooks.
EC: Who and what inspired you to start food blogging ??
Ramki: I get my kicks from getting newbies to realise that cooking can be fun & easy. All my cookbooks are aimed at people who have never cooked before. That is why there are no exact measurements or no complicated steps. Motivating newbies to start cooking was the inspiration behind one pagers.
EC: How did you come up with this concept of one page cookbooks which is a boon to newbies in cooking?
Ramki: I stumbled upon the fact that each cuisine has a set of key building blocks, various combinations of which give rise to innumerable recipes. For example, all the hundreds of south Indian curries are various combinations of just four building blocks - Tamarind, Tuvar dal, Yogurt and Coconut. A one page chart is all you need to show these variations.
EC: How much time and efforts are involved in preparing each of the one-page cookbooks ?
Ramki: Understanding what makes a recipe tick is the first step. Once I get comfortable with a recipe, I search around for the numerous variations, all of which get distilled into the One page format. Some one pagers take just a couple of days and some take weeks.
EC: Among all your one-page cookbooks which is your personal favourite and why?
Ramki: Basic Indian Curries poster and 1001 Chaats
I'm still delighted that the vast myriad of indian curries and Chaats can be captured in a single page !
EC: How was your experience with "1 for 500" event..Tell us something about it
Ramki: When One pagers became popular, critics accused me of oversimplifying recipes. A demo was the best way to answer them. I also wanted to prove to myself that these indeed work, even on a large scale. This was an idiotic thing to do, as a lot of things could have gone wrong, I never have cooked for a crowd larger than 20 and I grossly underestimated the difficulty n handling super sized equipment. Starting from scratch was another blunder as I had to chop up mountains of vegetables - I could have easily injured myself and that could have brought the event to an inglorious halt. But thankfully, with a good dose of luck, I was able to pull it off !
EC: Have your recipes been copied anywhere without your permission..How would you deal with plagiarism ??
Ramki: I guess the format protects the recipes. So thankfully I have not experienced plagiarism till now. I guess lodging a protest to all concerned authorities as soon as possible is still the best response.
EC: Your favourite vegetarian recipe
Ramki: 1001 Rotis is my favourite recipe list. So easy to make and infinitely variable, I think these will delight us for ever !

Good to know more about Ramki and his one page cookbooks. I have been visiting his space for a long time and some of my recipes are featured there as well. Thank you EC and Ramki.

Good luck to Ramki. May he come with many more of these one page wonders.

I like his web site too. Very cool way to create all those recipes in one page. Good luck! :)

Simple Indian food blog (author- EC) is the legal copyright holder of the material and pictures in this blog and it may not be used, reprinted, or published without the written consent of the author. All the measures used in the recipes are approximate. Please adjust the spices as per your taste. For any queries, please email us at easycrafts@gmail.com

Latest on other blogs